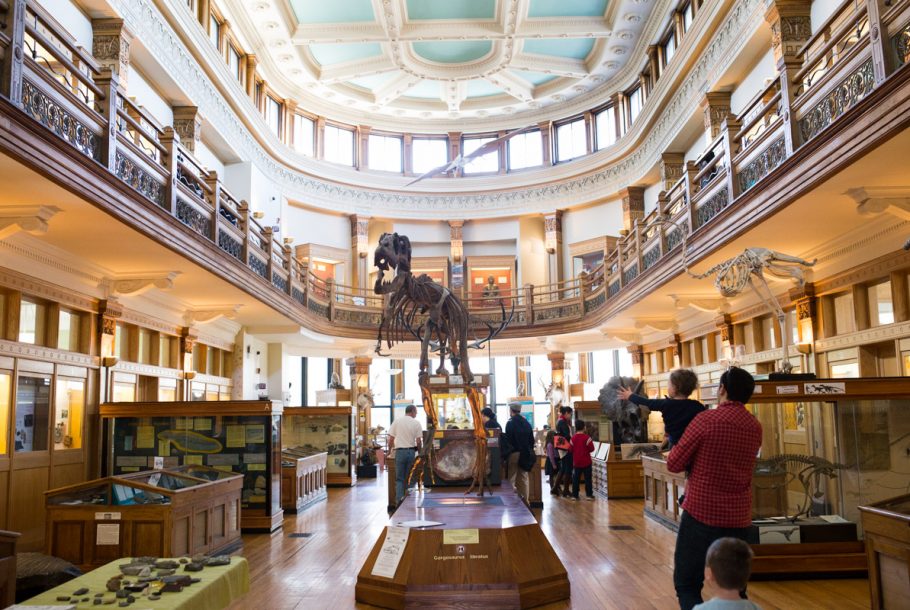 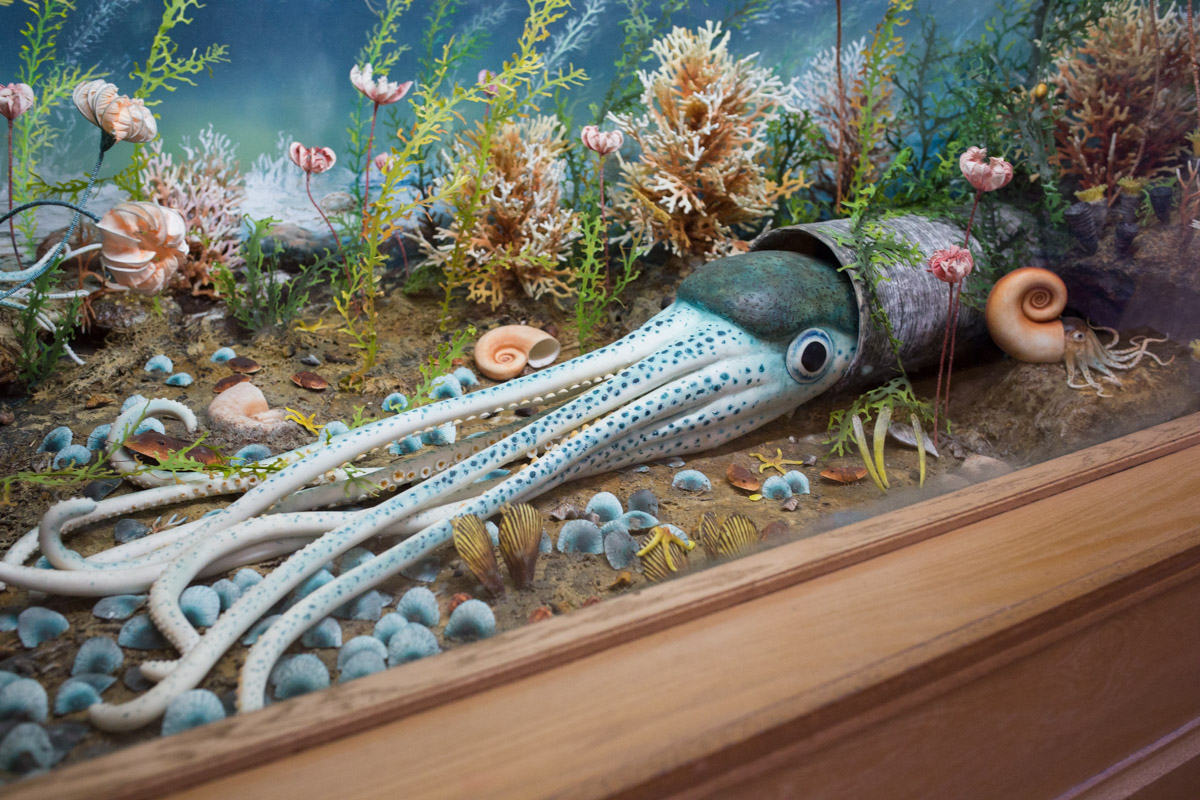 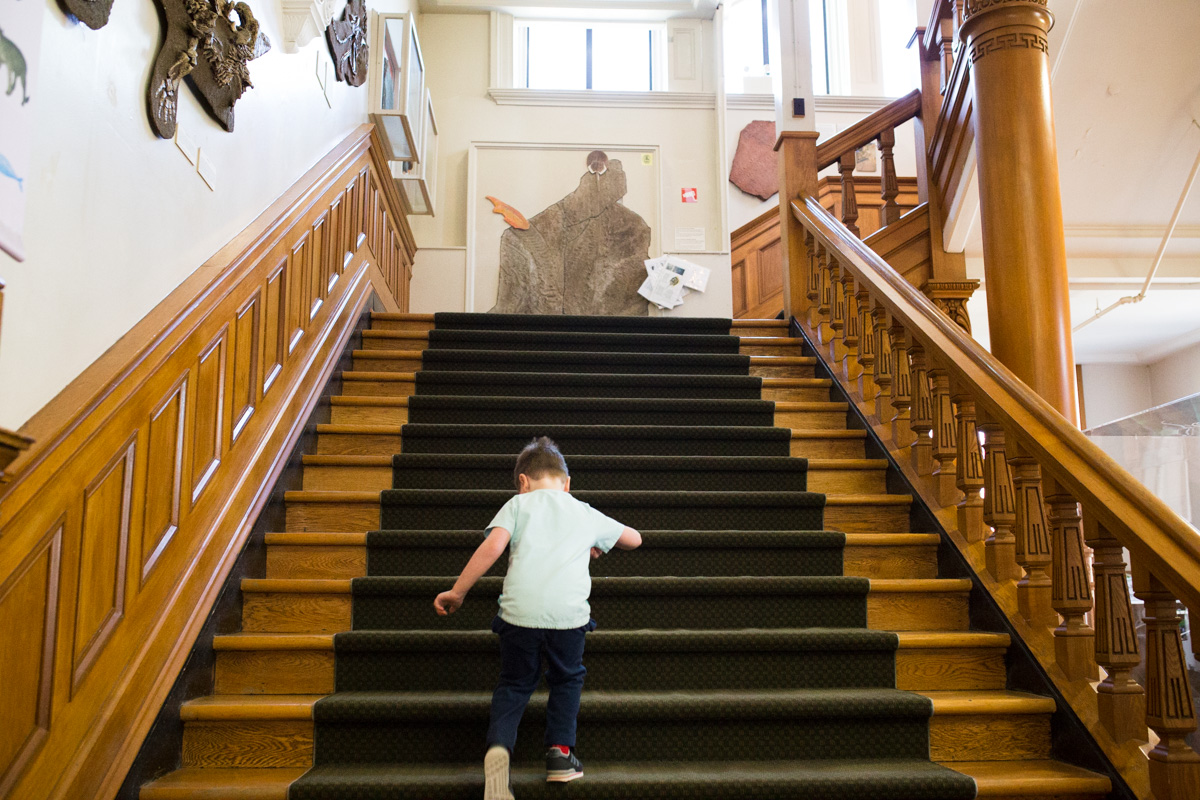 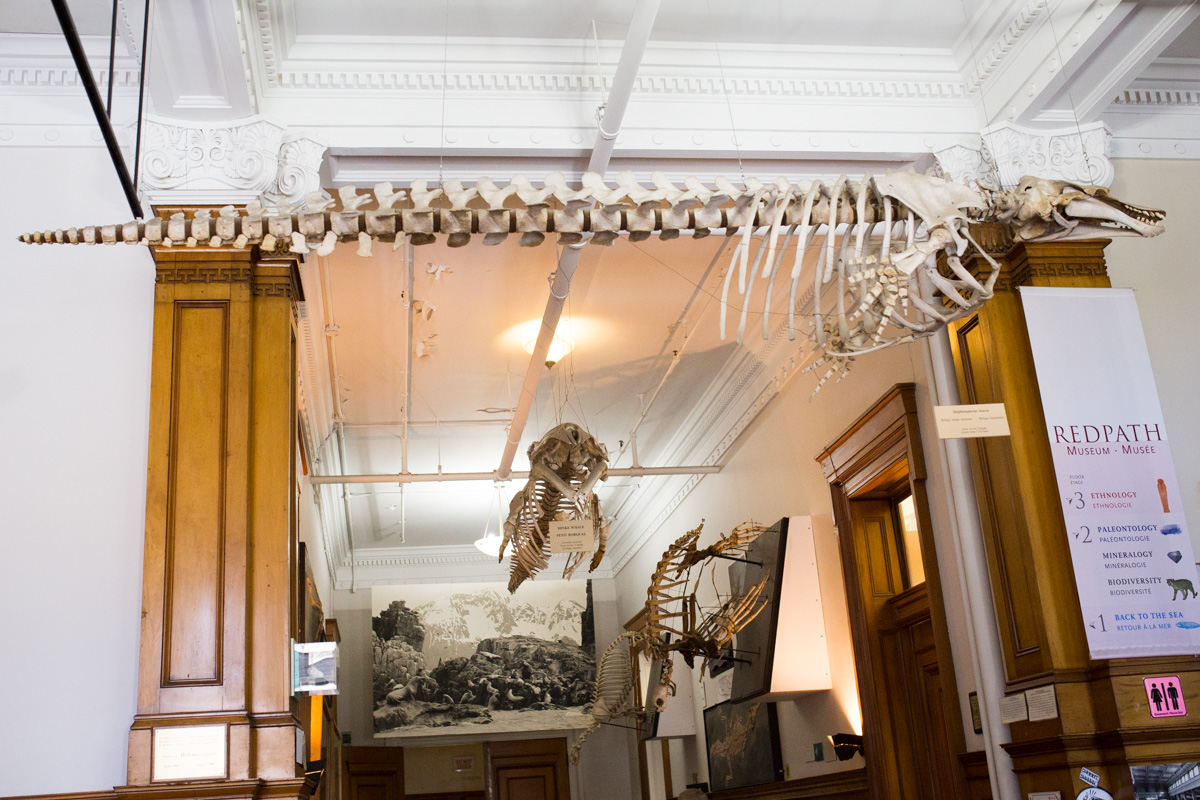 I have to admit that I was nervous about taking my children to the Redpath Museum after we had been to the Montreal Science Centre.  I didn’t know if dinosaur bones would be able to live up to fully animated dinosaurs but I really shouldn’t have worried because both of my kids absolutely adored this museum. 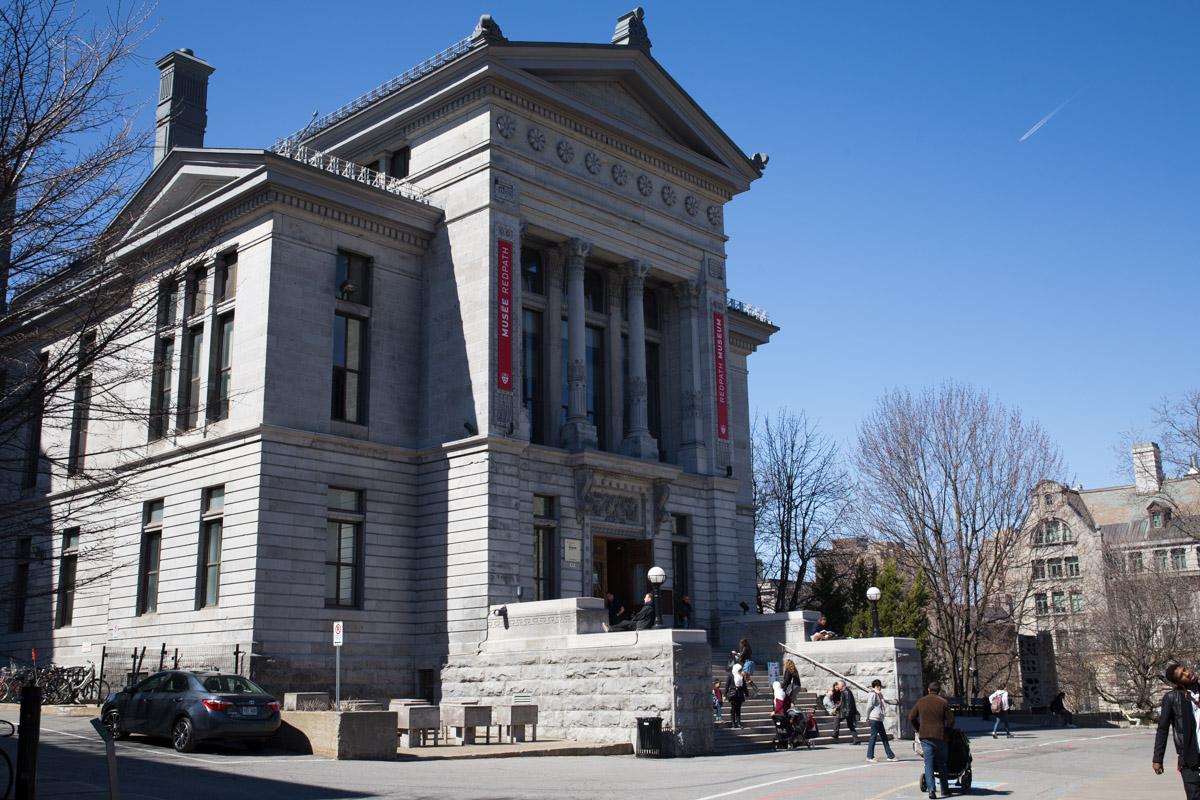 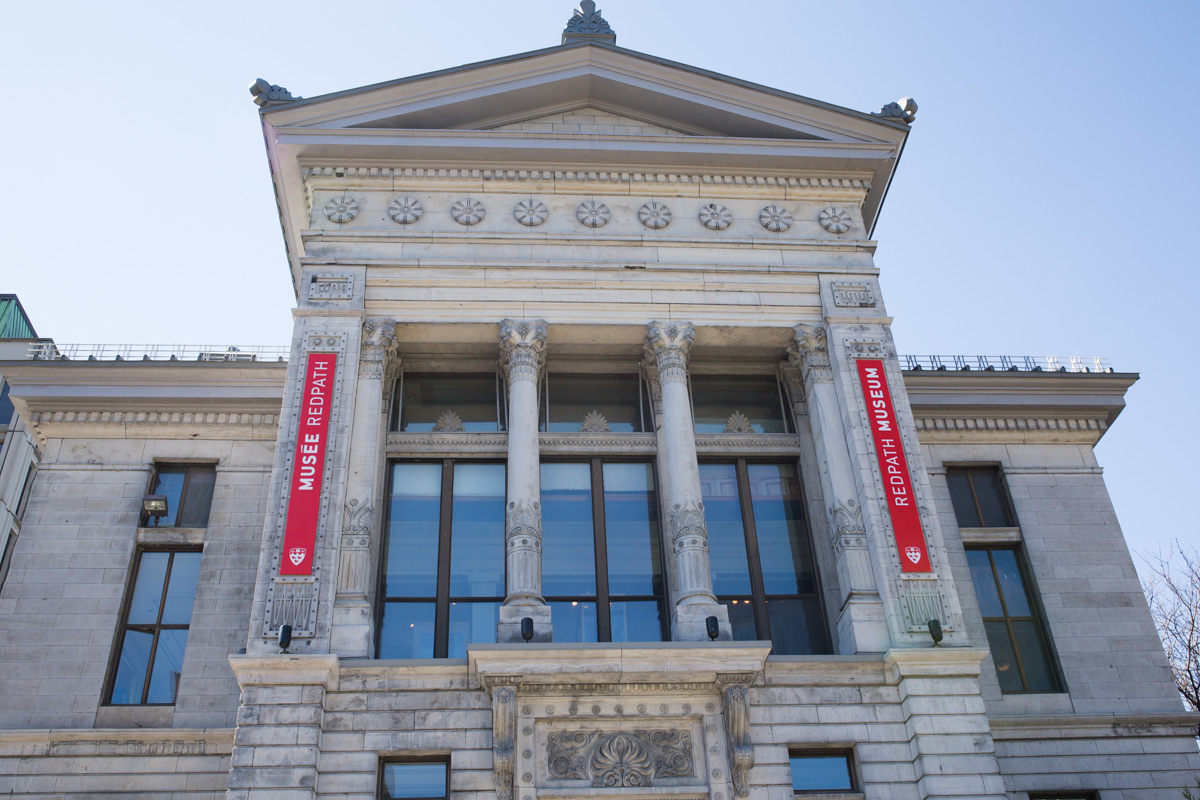 I’m not sure quite what I was expecting, but it certainly was not this imposing structure and awe-inspiring inside.  The museum is part of McGill University and located in the heart of the campus. 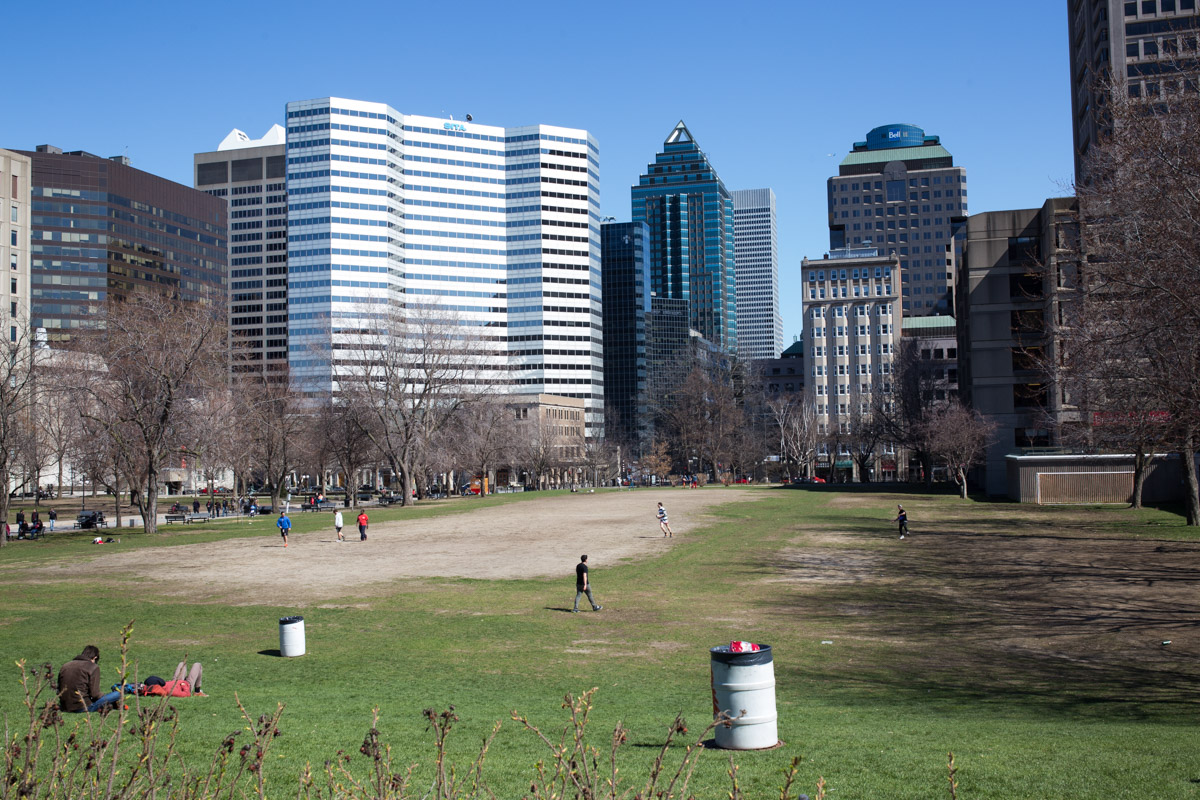 There are beautiful views of the campus and downtown.  McGill University is worth walking around for the architecture alone.  Even though I’d taken several French classes there, had worked downtown, given birth at the Royal Victoria hospital and lived in Montreal for 9 odd years, I had no idea just how big or beautiful McGill really was. 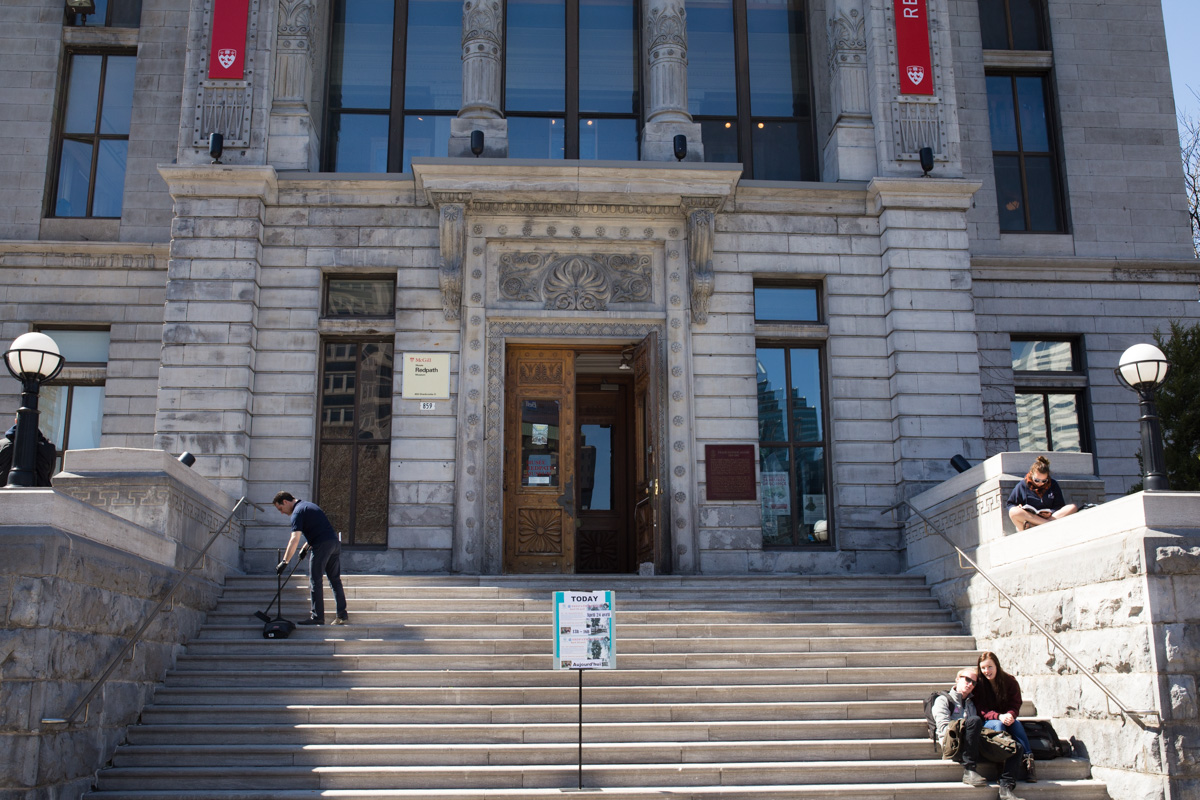 Unfortunately, there are a few tradeoffs for the old beautiful building – the first being no wheelchair, or stroller, access.  This meant we had to lug our double stroller up the stairs.  If you have little ones you sort of have to bring a stroller because the museum is in a pedestrian area and any parking or public transit is a bit of a walk.

Once inside it’s the same story.  There’s no elevator and the museum is located across the main floor and two upper floors.  They allowed us to park our stroller in the entrance way. 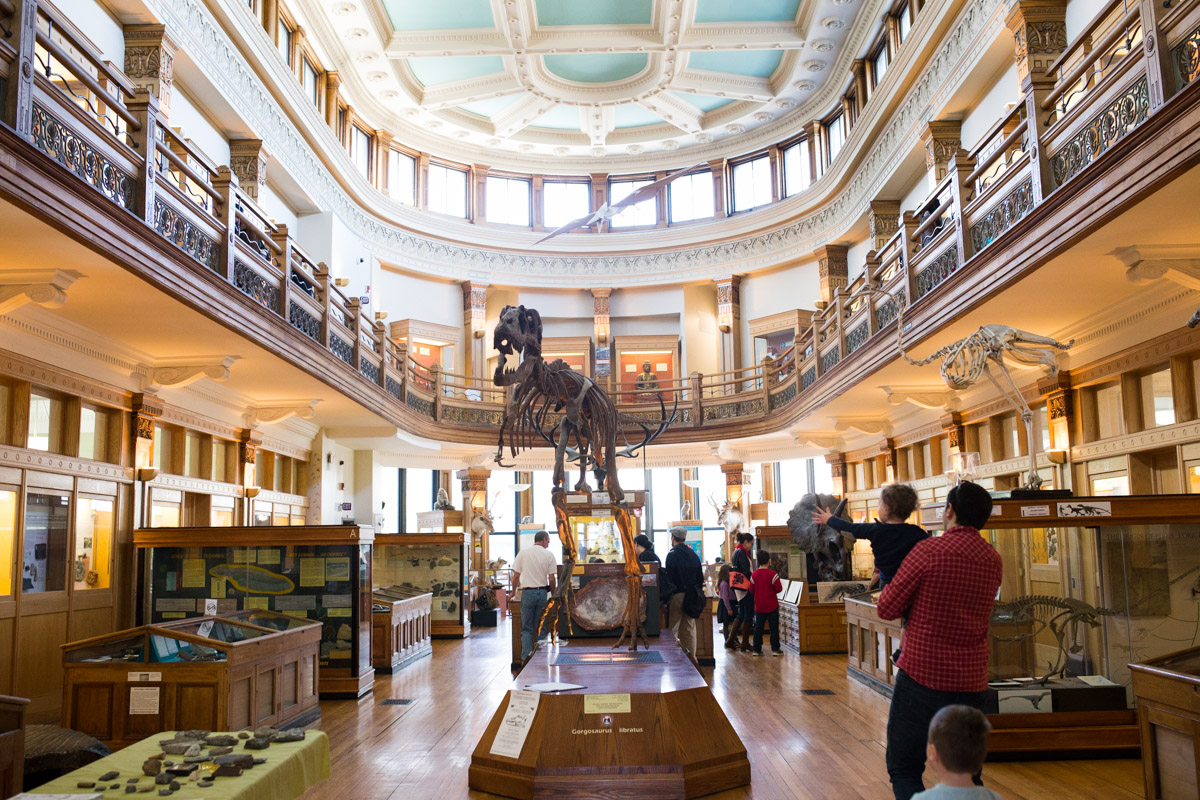 But, it’s all worth it.  My kids were SO excited by the museum.  I might dare say my youngest son Alex, at 18 months, was the most excited and he kept shrieking with joy. 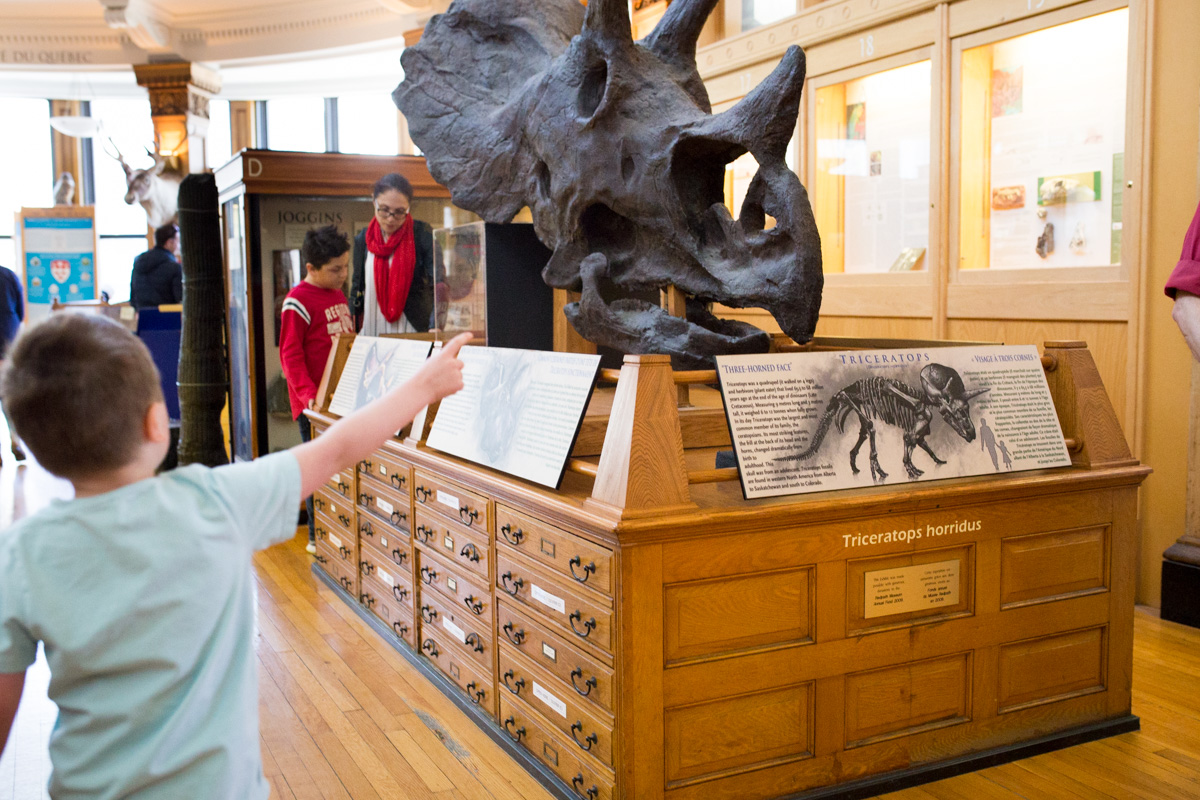 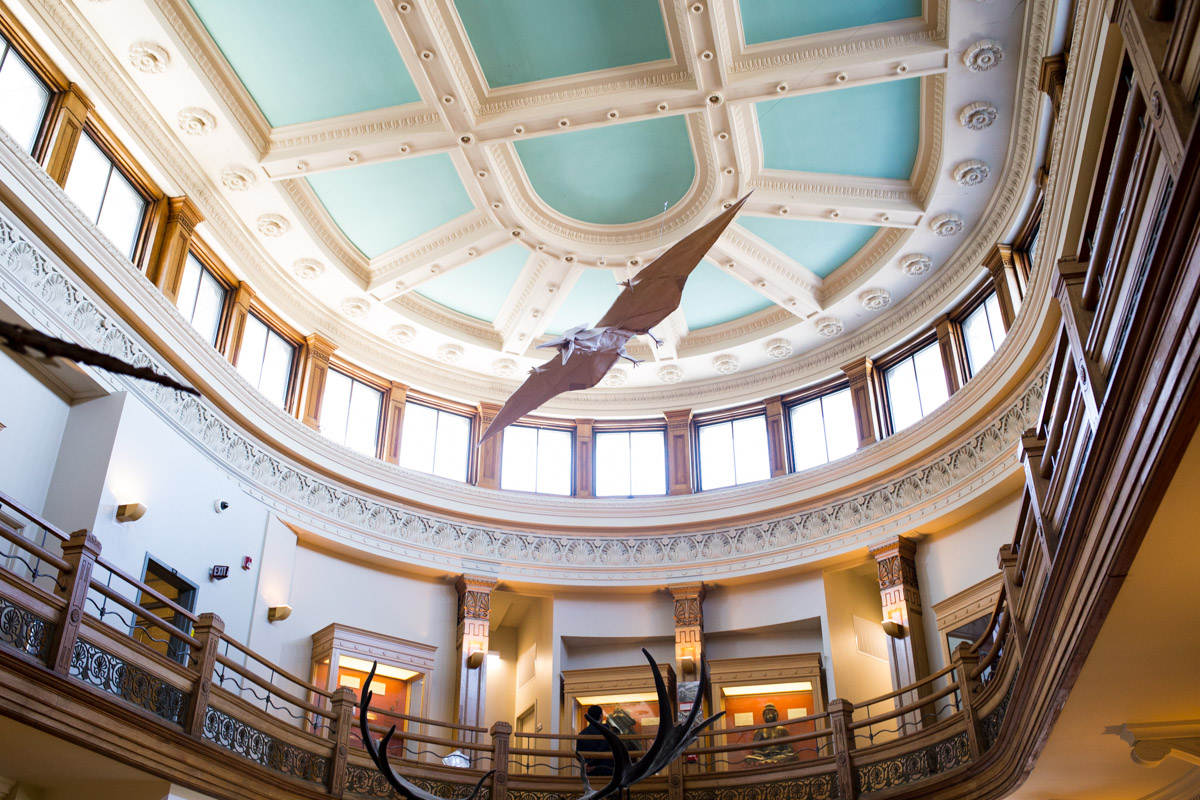 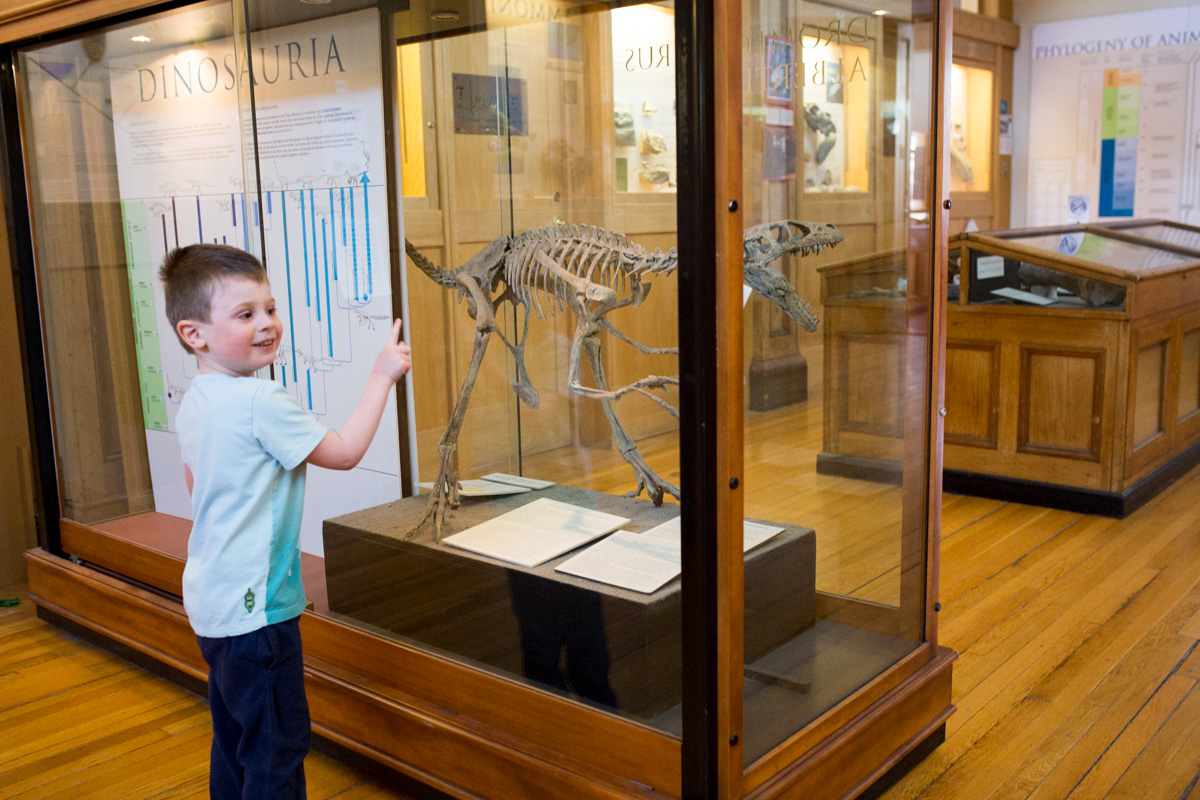 If you’re feeling organized and motivated there are Discovery Workshops every Sunday which are apparently excellent.  I spoke to a woman back when I was writing a different post, and she suggested the age for these would probably be around ages 4-8.

In addition to the dinosaurs, there are stuffed animals and other skeletons everywhere.  There are a lot of gems and rocks and other wonderful old stuff which I find fascinating but alas are less interesting for my little ones.

I have to say we did not spend an immense amount of time there though.  The displays are old and I was a little paranoid about my children tapping on the glass with all the ‘do not touch’ signs everywhere.  Also, as mentioned my youngest son was shrieking with joy quite a bit.  Most of the people and staff found this delightful, but there was one staff member who was clearly annoyed by this behaviour and it made me feel a little uncomfortable.  Having said that, my son is 18 months old.  I also saw a man in his mid-50s embracing a hyena so that his wife could take a photo.

After we took a little walk around the campus and marvelled that Montreal had such a beautiful university right in the centre of the city.

I will definitely be going back to the Redpath Museum.  What a delight!

By the way, we easily found parking on McTavish Street north of Dr. Penfield as advised on their website.

Also, check their hours before you go.  They are closed on Saturdays and many holidays.  Be sure to bring cash with you as payment is by cash donation only.

Have you been to the Redpath Museum?  How did you like it?

Here are some other Montreal Kid Activities. 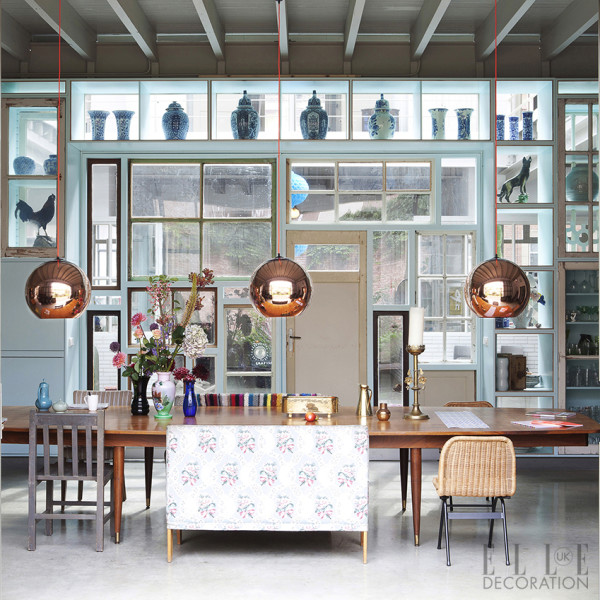 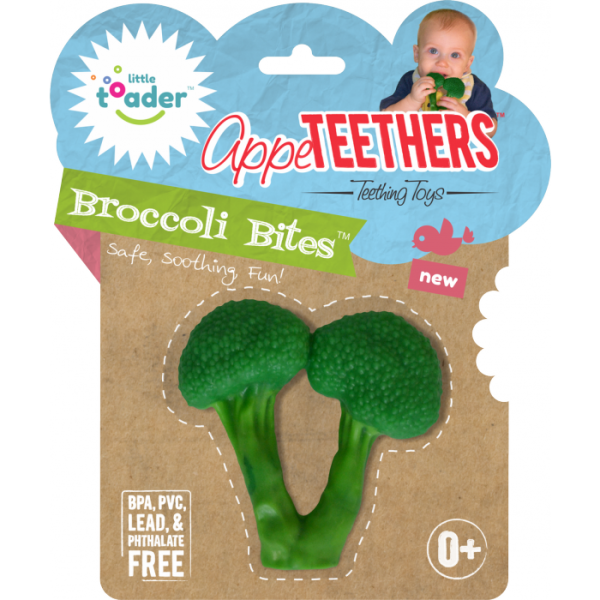 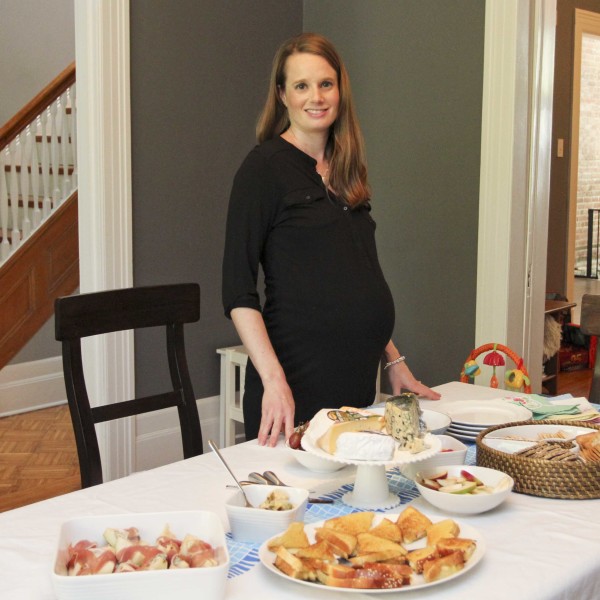 Appetizers, Mains, Recipes, Side Dishes
READ ARTICLE
There are no comments yet. Be the first to comment.