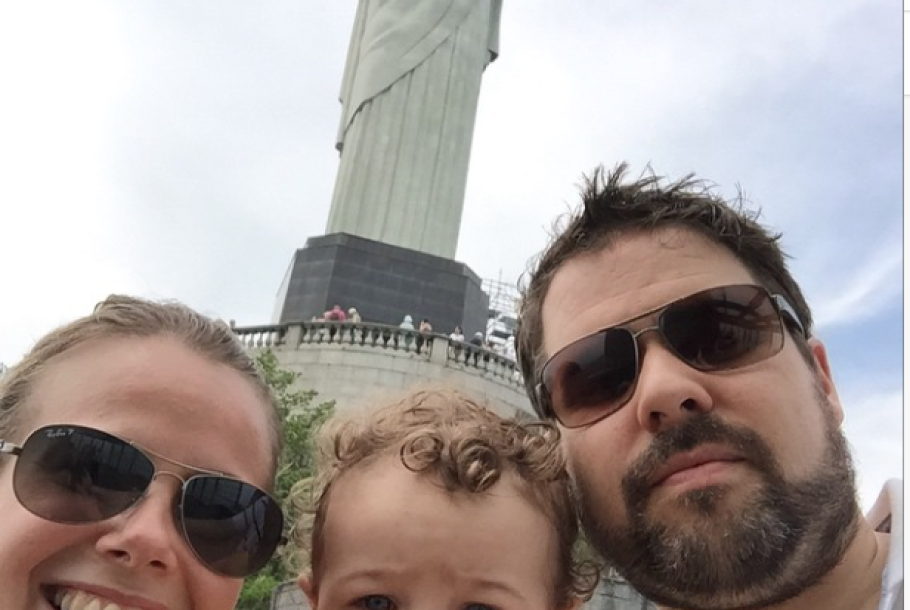 Travelling with Toddlers: Melissa in Brazil

Melissa Paterson is the adventurous fun-loving and energetic little sister everyone wants to have. She’s good humoured, relaxed and always up for a good time. When I was looking through her Facebook pictures for a good photo of her, I noticed nearly every one had her making a silly pose, doing something crazy or with a huge smile on her face. Classic Melissa. Unfortunately, we married Melissa off to an Englishman while she was visiting in London so we don’t see each other nearly enough, but we always have fun when we do.

She was kind enough to tell me her story about Brazil. 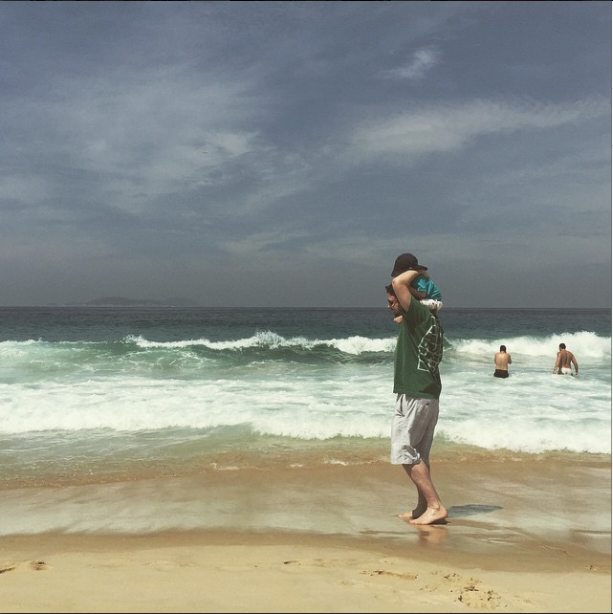 As Michelle’s sister, I am always happy to support her and contribute to this blog. When she asked if I would write something on travelling to Brazil with our son, I jumped at the chance. I really struggled to find any information on Brazil with a baby before we left and I wanted to share some of my newfound wisdom.

I had the pleasure of travelling to Rio de Janeiro, Brazil with my husband and our 15-month-old son. We chose to go to Rio as my husband’s sister is living there and working for the Rio 2016 Olympics. We felt it was the perfect opportunity to see Brazil with home accommodation and a great local guide.

While both my husband and I have travelled extensively, neither of us had been to South America and we were really excited to see Brazil. I think both of us were expecting a third world country full of crime and beautiful half naked women. In reality, we couldn’t have been more wrong. Yes, there were a lot of string bikinis and speedos but all shapes and sizes were celebrated and even in my post baby/newly pregnant bikini body I couldn’t have felt more comfortable.

The city was much more metropolitan than we were expecting with great shopping, good restaurants and a thriving nightlife. Although we did spend most of our time in the higher-end areas of Ipanema and Leblon taking reasonable precautions, I never felt unsafe. 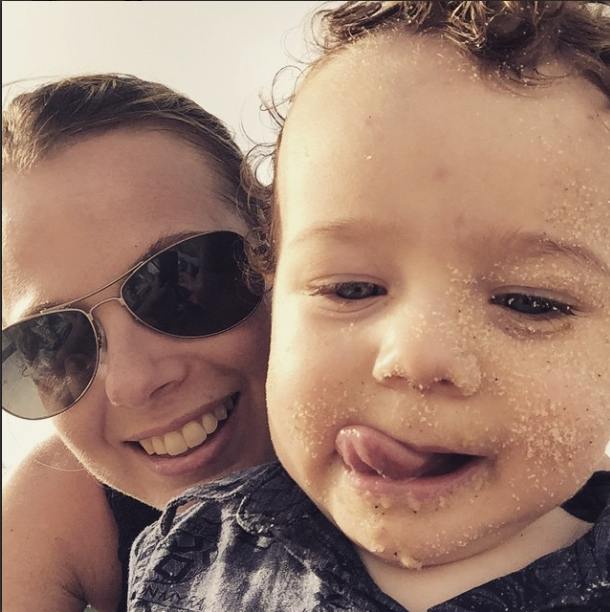 We went in March, which is right at the end of the summer. Prices (and crowds) are a little more manageable and the weather – although still really warm – was definitely not unbearable.

We stayed with my husband’s sister in Ipanema and I can’t recommend this area enough. There are a ton of shops and restaurants and we were only a 5-minute walk from the beach. Additionally, we never felt unsafe as the area is quite far from the more dangerous favelas and is fairly high-end. The other area recommended to us was Leblon as it is similar to Ipanema, if not a bit more high-end. We were recommended time after time to avoid Copacabana – it has definitely seen better days as well as being overcrowded, touristy and much less safe.

Traveler beware, nothing is open in Brazil before 9am. This means that if your baby is an early riser (or even a normal riser) you are probably going to have to give them breakfast in the hotel room. We brought a box of Weetabix with us and just bought some milk to keep in the fridge. This helped tide our munchkin over until we could all go out for brunch. Fresh fruit is also abundant and a good breakfast or snack option. 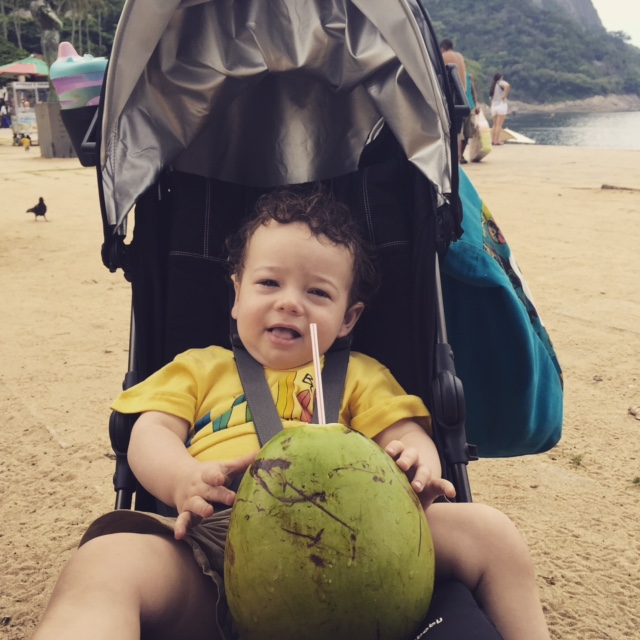 Babies are LOVED in Brazil! You will be stopped on the beach/street/shop so people can look inside your pram and blow kisses at your baby. This does get tiresome but it also means that bringing your baby to a restaurant, any restaurant, is actually much easier than in other cities as nobody glares at you from other tables. We took Charlie with us for every meal and most restaurants had high chairs and accommodating staff.

We loved having brunch (and pizza) at Alessandro and Federico in Ipanema as the food was good and the staff was great. At night we put him down in his stroller and, even at the most high-end restaurants in Leblon (CT Boucherie and Zuka were our favourites), they let us wheel the pram next to the table so he could sleep while we dined.

One word – beach! The beach was our saving grace. Charlie could run riot, play in the sand and dawdle in the water and we could (sort of) relax. He loved it and we got a bit of down time. The sun was an issue but in his full body UV suit, sunhat and slathered in sun cream, Charlie was pretty well protected. You can rent beach chairs and umbrellas on the beach for cheap, which is well worth it for providing a bit of shade.

Note: Make sure you bring sun cream with you as it can be expensive in Brazil. Mosquito nets and spray are also worth bringing as the mozzies can get bad, especially at night. 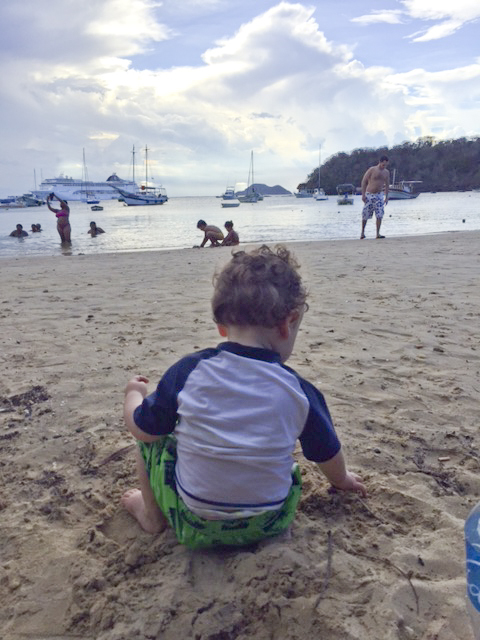 In addition to the beach, we also went up the Sugarloaf, a gorgeous viewpoint, and up to see Christ the Redeemer. These are the two main tourist attractions in Rio. I really recommend getting to these places as soon as they open as the lineups can become horrendous. I can confirm that there is NOTHING worse than standing in a lineup for hours with a 1 year old in 35-degree heat.

The Sugarloaf was relatively straightforward and the beach next to the Sugarloaf is actually lovely and calm with a nice shaded area – definitely worth spending the day there. 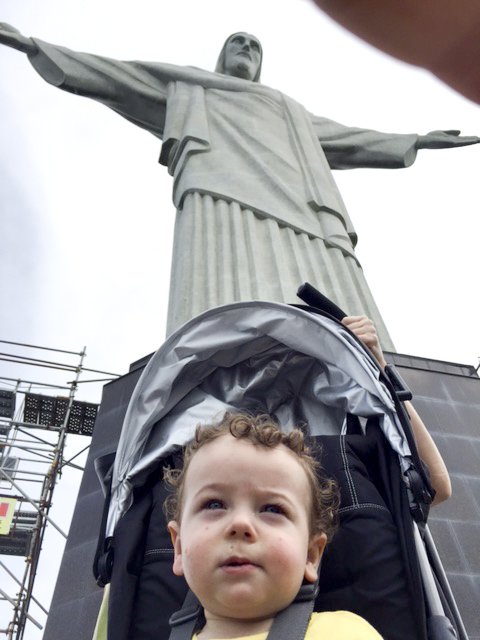 Christ the Redeemer on the other hand was a nightmare! It is crowded and busy. The tram to the top is slow, packed and ridiculously hot. There are cafes at the top but they are stupidly expensive so bring lots of water and snacks. In the end, we were glad we did it, but you couldn’t pay me to do it again!

This was the area I was most concerned about before leaving for Brazil. I knew we would be taking a car to and from the airport (~an hour long trip) and we would not have a car seat. In my mind this is a huge no-no and I was panicking. I felt my only options were to take our car seat (not checked in as apparently they tend to go ‘missing’ from the baggage carousel) or risk it. In the end, after much deliberation, I am somewhat ashamed to say I risked it.

Essentially, we took taxis everywhere in Rio as they are cheap, convenient and in abundance (picture yellow cabs in NYC – and they are yellow). Not one ever had a car seat. We would try our best to put Charlie on our lap and strap him in, or put him in the sling on us, but there were times where he was just uncontainable. Even if you had a car seat, there is no way you could lug it around Rio with you to use every time you got a taxi. This was difficult for me to wrap my head around but in the end we just went with it and were lucky nothing happened. I suppose this would be personal choice for every traveller.

Additionally, we used a sling and a small umbrella stroller, which were both easy on the beach and in the city.

Everyone warned me that baby stuff costs a fortune in Brazil so we ended up bringing all our own kit with us. In the end, we ran out of diapers and had to buy more and yes they were expensive ($15 vs $5 at home) but not extortionate. Essentially, you can find any baby/toddler kit you need in Brazil but just expect to pay 2-3x the price you would at home. Swim nappies were the exception (they don’t seem well used). We brought our own and only used them in the pools, choosing to ‘risk it’ on the beach.

Note: Bathtubs are very hard to find in Brazil so if your little one is too young to get thrown in the shower you may have to spring for a small plastic tub (available in most department stores) when you arrive.

People in Brazil do not speak English – none, nil, nada. If we were lucky enough to find an English-speaking waiter, they were usually Argentinian. Be prepared to use google translate, language guides and write things down for taxis. Many of the high-end restaurants had English menus but you still had to do a lot of pointing and miming. 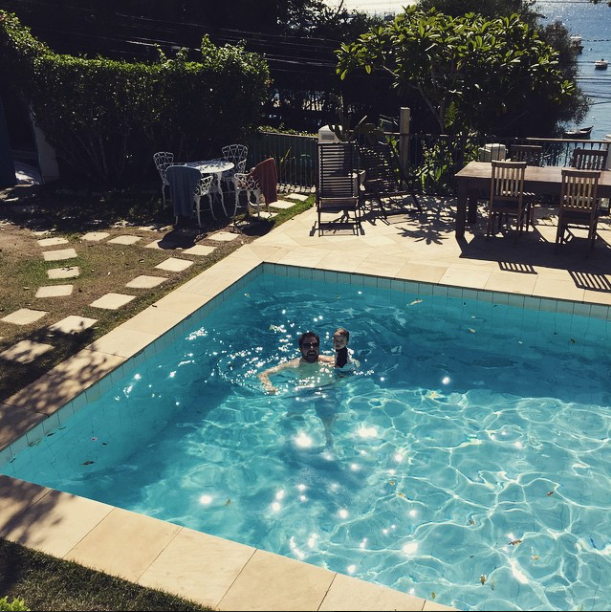 We were recommended by everyone to do a side trip to a little resort town called Buzios. Buzios is fabulous with amazing beaches, great shopping, and cute restaurants on the seafront.

The cheapest way to get there is by bus but we couldn’t face a 4.5hr bus ride with Charlie so ended up getting a private driver and car. It was pricey (~£300/ CDN 550 return) but it was only 2.5-3hrs, comfortable and convenient – we felt it was money well spent. My sister in law organized this for us and we also borrowed a car seat for the journey. If the cost is too much for a private driver you may be able to find other options, or if you are braver than us, rent a car and drive yourself.

We stayed in a hotel called Pousada Casa Buzios, which I can’t recommend enough. It was well located, super accommodating for kids and babies and the owner spoke English, French and Spanish. She was also ridiculously helpful when I got sick (more on this next). 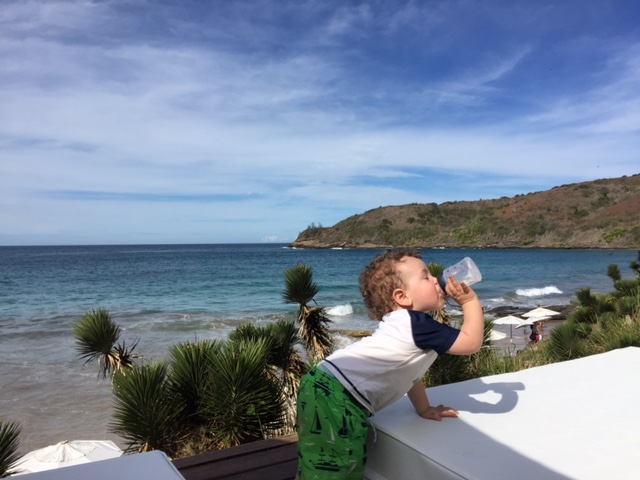 Unfortunately, while in Buzios I came down with horrible tonsillitis. Frustratingly, because I was pregnant, the pharmacists refused to give me medication until I saw a doctor. We tried to make an appointment with the local clinic but couldn’t even get past reception due to the language barrier. Our hotel manager (see above) was great in trying to contact the local doctor for me but we had already returned to Rio before I could see him. Eventually, I ended up going to a private hospital in Rio (Copa D’or Hospital) with my sister in law. The treatment was superb and the whole trip only cost £100/CDN 184 (paid back by insurance). However the language barrier again proved shocking and to be honest, I am not sure I could have done it without my sister in laws Portuguese language skills. I did find an international clinic on Google but NONE of the ex-pats my sister in law knew had heard of it, which we thought was a bit dodgy and decided to avoid. Bottom line is don’t get sick on Rio – or at least have a good translator!

Note from Michelle: If you think she’s exaggerating on the language barrier, she later told me she noticed on her medical form her name had been recorded as First Name: Melissa Anne Last Name: British Citizen.

Overall the holiday was fabulous and Rio is definitely do-able with a small child however do your research before hand and definitely have a phrasebook on you at all times!

A big thanks to Melissa and her family for sharing their story and photos! 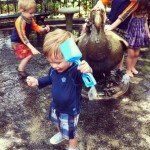 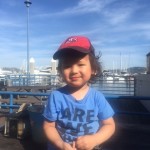 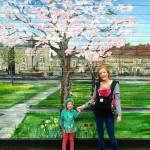 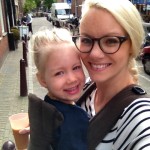 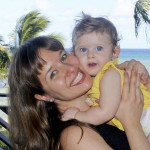 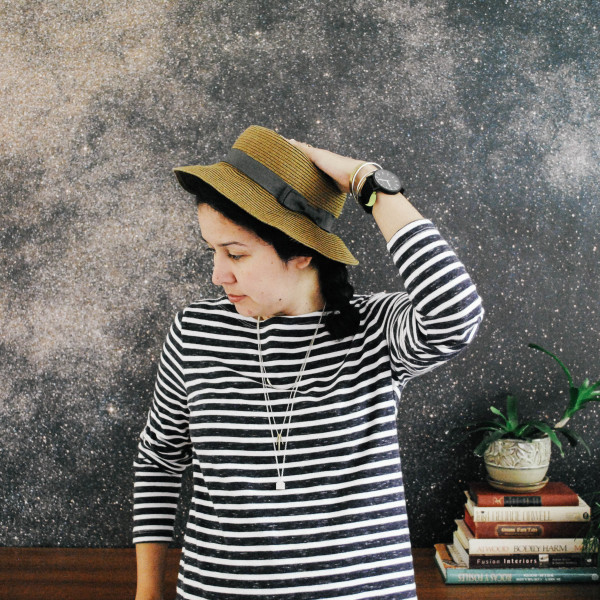