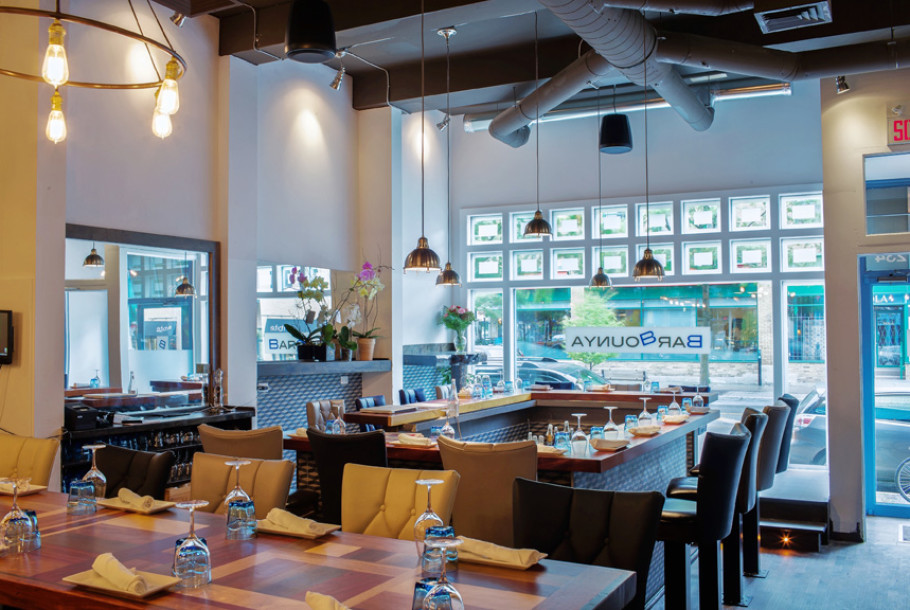 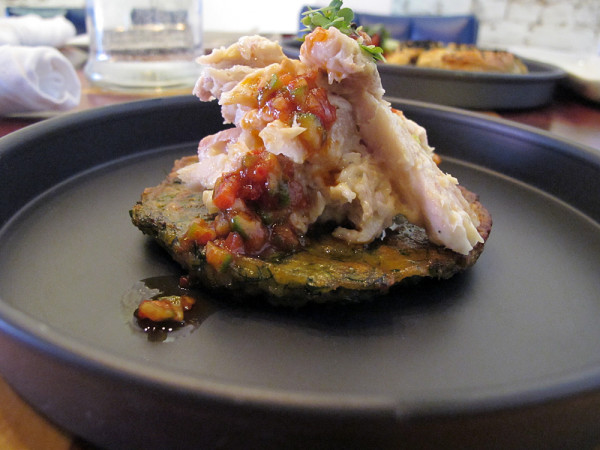 A couple weeks ago I was writing an article on Chef Fisun Ercan who is the chef-owner of both Restaurant Su in Verdun and BarBounya on Laurier.  We were in touch, and she let me know that BarBounya was in fact opening up for lunch & brunch that week and would I care to try the lunch dishes?

So, I invited along a willing friend and we dove into the lunch menu (which is also the brunch menu) at BarBounya. 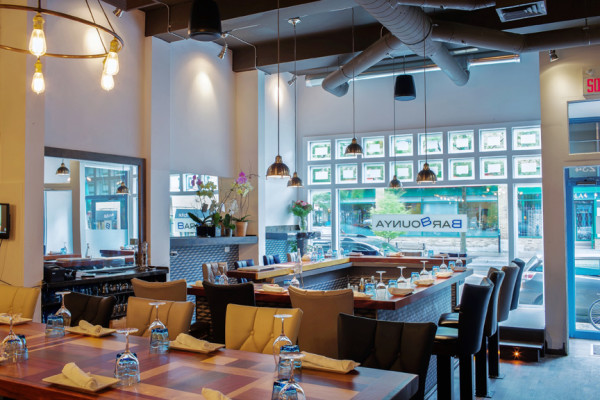 First off, the place is absolutely lovely.  At night, it’s pretty rocking with a great atmosphere.  During the day, it’s light and bright (but I would say not stroller friendly with raised seating and tables on high platforms).

First we shared the zucchini pancake, with smoked mackerel, spicy salsa and herbs ($18).  I was hesitant in ordering this dish, as was my friend.  We had both spent extensive time in the UK and the smocked mackerel there is usually quite strongly flavoured.  This was the opposite.  It was light, fresh, and absolutely delicious.  I really loved it. 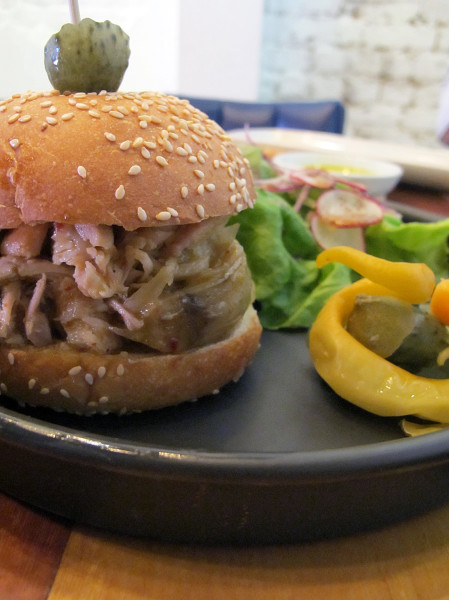 Second, we tried the Charlevoix organic chicken sandwich with roasted vegetables ($15) which sounds rather dull on the menu but is anything but. Made from a whole chicken, the meat is incredibly moist and flavourful served on a beautiful sesame seed bun with side salad.  Yum! 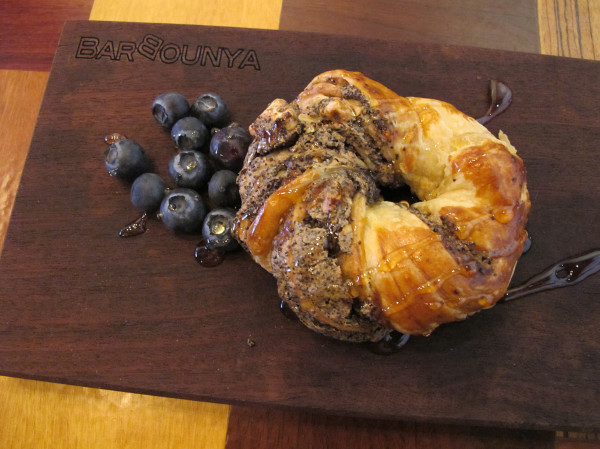 If you are looking for more brunchy items, they have them including this puff pastry twist with poppy seed paste, walnuts and honey ($12).  Unfortunately, I didn’t have enough room to try it.

Both dishes I tried were so delicious and I would highly recommend lunch or brunch. 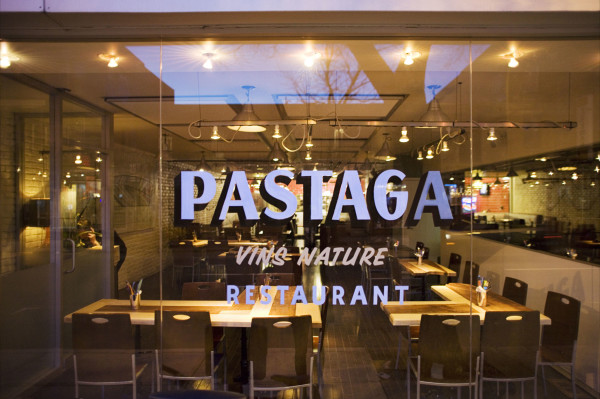 In other news, Martin Juneau is once again hosting his Royal Canadian Mondays at Pastaga (RCMP – get it?).  I wrote a short but, ahem, well researched article speaking to Juneau about the concept and getting in touch with all three chefs to get their lowdown.

Basically, it’s a chance for you to get a taste of what some of the best chefs outside of Montreal are doing (without the plane ticket) and there are some pretty hot chefs on the ticket right now.   Lucky diners can get to try anything from a home cooked family meal with a meat focus (CHARCUT Roast House) to rabbit and donuts (Model Milk) to rabbit sausage (Mallard Cottage).

All the chefs I talked to were so excited about participating and being invited to Montreal.  Get this – they even often prep the food in their own kitchens and fly it all to Montreal.  Food… for 60 people….  When I quizzed Juneau on how this was actually done, he really didn’t seem to think it was a big deal mentioning something about coolers….

Here’s the line up (also see my article on Urban Expressionsfor more details and pics):

There is also an April chef yet to be scheduled. 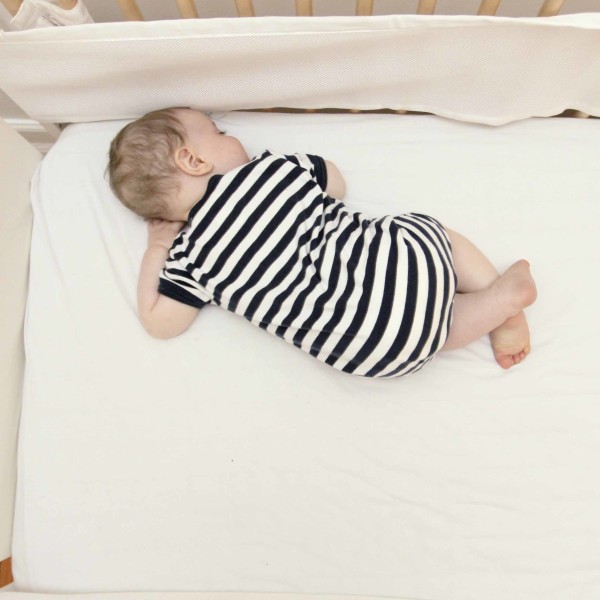 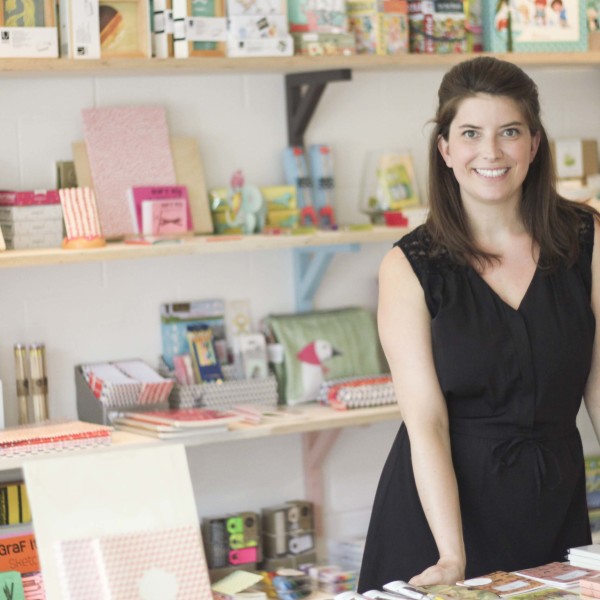 La Diperie – Soft Serve with a Dipping of Deliciousness

Cuisine, Ice Cream, Kid Friendly Restaurant, Plateau
READ ARTICLE
There are no comments yet. Be the first to comment.